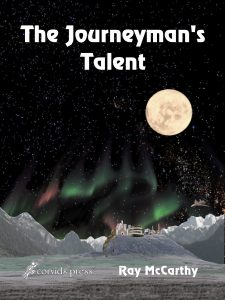 Part 2 of the Maisie Trilogy.

Sequel to “The Apprentice’s Talent”. Maisie is no longer an Apprentice, but a Journeyman studying to be a Master, three times over, at the Circle College for Talent, 80,000 light years from Earth, on Caemoria. But on a visit to Laramos city to sign a contract for her full spectrum colour system she narrowly escapes being murdered.

Why was the Mogul of House Funathim assassinated? What will she spend her rapidly growing quantity of credits on?

How has Earth managed to build a fusion powered starship without Talent?

Maisie thinks it’s a bad sign that that Earth has named them the “Valkyrie Class” and that Russia, China, Europe and USA have all switched their military budgets to co-operate and build Valkyries, all managed by the Solar Alliance. The Wildgrave Plonnis seeks to understand by questioning Maisie while helping her to spend her new found wealth. She’s still the only Tellurian to ever leave the Solar System, till the first Valkyrie “jumps” just beyond the Kuiper belt.

“The Solar Alliance” (2016 release) is the story of what happens on Earth after Maisie leaves and is parallel to “The Apprentice’s Talent” and “The Journeyman’s Talent”.