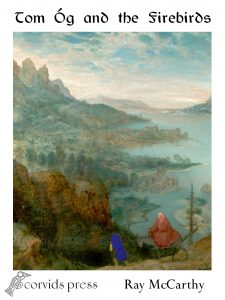 Tom Óg realises he’s only clerical staff and overheard “he’s not detective material”
Emer points out that Marion hired all orphans because she was orphaned.
Caolán suggests the five try and solve a case to boost Tom Óg. Emer wonders where the Firebird feather that Anand dropped had come from. She suggests Anand’s hoard is in the Kiranithiaen Mountains. Why doesn’t Tom Óg investigate that with their help during the holidays?

Manannán had brought the firebirds from the Horn of Africa. The Greeks had called the golden pheasant related peafowl like birds the Phoenix, possibly due to the Phoenicians being experts at red and  purple dyes. It has flame like red, orange and yellow feathers with the male having a crown like thing on its head and larger tail feathers. Hunted to extinction on Earth for the feathers.