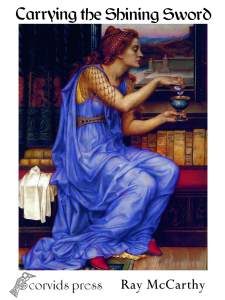 Who has poisoned Megra and her father, the Emperor? Eilis (Alice) accepts she is different and reveals why to her four friends. They learn about Skandi culture and the forbidden Skand magic. They take ship to another continent in search of an antidote and answers

Notes:
Detail from “The Love Potion” by Evelyn De Morgan, recoloured for the blue of a Skand sorceress that worships the Æsir-Vanir.
Released.