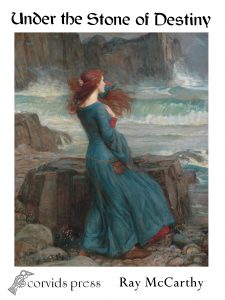 Four teenagers are trying to end a ruinous war; a human, and elf Princess, a dryad Mage, and dwarf Wizard. Or at least that’s what Kevin, the student magus thinks they are.
Their food is exhausted and they are close to despair when told to wait for a companion at the stone circle by the crow, a familiar of the college Dean.
Most of the action is on Magh Meall, a legendary Otherworld where the Tuath Dé live in exile.
Now the Magi Council and the Druids of Ollathair have wakened the Sleepers, the Morrígna, (Badb, Macha and Neamhain) and the rest of Manannán Mac Lir’s Aés Sidhe Warband.
Notes:
Released Midnight 4th/5th September 2016
Detail from ‘Miranda, The Tempest’ by John William Waterhouse.
Retail sellers for the ebook of Under the Stone of Destiny
Smashwords Store, Apple, Barnes & Noble, Gardners Extended Retail, Kobo, Odilo, Scribd, Amazon, Play Store

Got a good link, resource, local writers group or other idea?